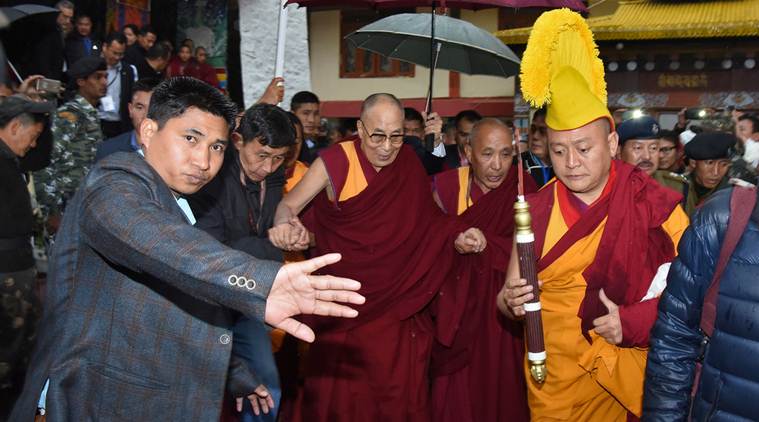 UPSET WITH the Dalai Lama’s visit to Arunachal Pradesh, especially Tawang, Chinese Foreign Minister Wang Yi refused to come to Delhi to attend the Russia-India-China foreign ministers’ trilateral meeting in April, The Indian Express has learnt. Sources said the RIC ministerial meeting, to be hosted by External Affairs Minister Sushma Swaraj, was scheduled to be held in Delhi on April 14, but Wang refused to come for the meeting.

The Indian side tried to accommodate Wang and also suggested alternate dates later in April — between April 20 and 30 — but the Chinese side did not agree to attend the meeting even then. Sources said Russian Foreign Minister Sergei Lavrov had confirmed his participation and was ready to visit India, but he was asked by the Indian side to hold on. The meeting was finally cancelled.

While Beijing officially conveyed that the minister’s schedule did not permit him to attend the trilateral meeting, sources said the Chinese diplomats made it clear privately that Beijing was “extremely upset” with India over the Dalai Lama’s visit.

Sources said this was one of the first actions taken by an angry Beijing. China had summoned the Indian ambassador in Beijing on April 5 and lodged a strong protest as the Dalai Lama began his tour of Arunachal Pradesh.

Warning New Delhi that Beijing would take “necessary measures” to preserve its territorial sovereignty and legal interests, the Chinese Ministry of Foreign Affairs had said the visit by the Tibetan spiritual leader could “severely damage peace and stability in the region” and “hurt ties” between the two countries.

New Delhi had said that the Dalai Lama was a “revered religious leader” who had visited Arunachal Pradesh on “half-a-dozen occasions” in the past, and had urged that no political colour should be ascribed to his religious and spiritual activities, and his visits to states in India. India had said no artificial controversy should be created about his visit.

But Chinese Foreign Ministry spokesperson Hua Chunying had said: “China will take necessary measures to firmly preserve our own territorial sovereignty and legal interests. We ask India to stop this wrong behaviour. Taking advantage of the Dalai Lama harms China’s national interests. Do not speculate and expand the sensitive issues between two countries, do not purposely harm the negotiation of boundary as well as the foundation of our bilateral relation.”

That was Beijing’s sharpest reaction to the Dalai Lama’s visit, the fourth in under a month. “Tibet-related issues involve China’s core interest. China’s standpoint on this issue is consistent and clear. India does not care about China’s concern and negotiation and has purposely arranged the visit to a disputed area of China-India boundary. India’s invitation to the Dalai Lama to the disputed border region will severely damage peace and stability along border areas and hurt ties between the two countries,” Hua had said.

China maintains that parts of Arunachal Pradesh, which it refers to as South Tibet, form part of the mainland and India’s continued engagement with the Dalai Lama will cause damage to bilateral ties.Beijing was also irked over Minister of State (Home) Kiren Rijiju’s presence in Tezpur, which it perceived as official and political endorsement of the Dalai Lama’s visit.

Ties between India and China have been strained since 2016, over Beijing’s blocking of India’s application to become a member of the elite Nuclear Suppliers’ Group and efforts to designate Jaish-e-Muhammad chief Maulana Masood Azhar as a “global terrorist” at the UN(THE INDIAN EXPRESS,2017).