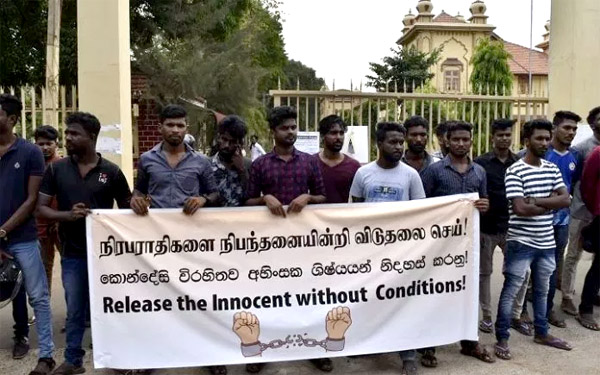 Students of the Jaffna University engaged in an attention drawing protest yesterday in front of the University premises. The protest was undertaken to demand that the Student Federation president, Secretary and the Canteen operator who were unjustifiably arrested following a search in the University, in the wake of the Easter Bombings, be fully acquitted.

Following the Competent Authority of the University claiming joint responsibility for the arrests made within the Campus and promising that he will stand by students struggles and do the needful to release the arrested as soon as possible, they have decided to temporarily  abandon the boycott of classes and the classes will re-start on Monday.

They also said that they will resume boycott and undertake several democratic struggles if the full acquittal of the arrested is not possible through their current efforts.

Previous PostAttempt to place Buddha statue after demolishing the foundation of Pillaiyar Temple at Kinniya, Trincomalee Next PostEaster terror attacks had a radical face of anti-Western and anti-Semitic attributes: Tamil Action Committee