Opposition to the merger of North and East – Demonstration in Trincomalee 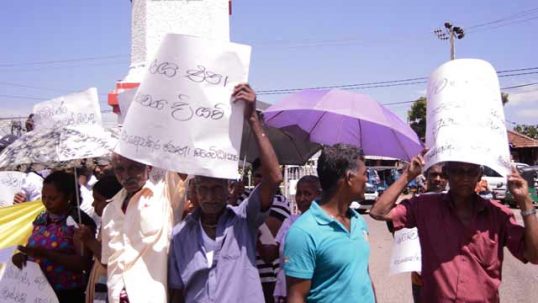 A protest Demonstration was held near the Clock tower, Trincomalee by the Eastern people Organization yesterday. This rally was held in protest of the new Constitution and the merger of North and East.

This protest was held from 10.45 to 11.45 and more than 80 people participated in it anf shouted several slogans.

Former MP of the National Freedom front and the president of the Easter People’s Organization Jayantha Wijesekara said that, the Eastern people do not like the Merger of North and East.

Previous PostThe Task of eliminating Malaria Mosquitoes to be commenced immediately Next PostMahindha out to mischief to grab the power, rebukes Sampanthan