New Sri Lankan President Maithripala Sirisena began assembling a cabinet on Saturday on his first day in office as he looks to deliver on pledges to improve the war-torn nation’s diplomatic standing and implement democratic reforms.

Sirisena, who was sworn in Friday evening after a shock election victory over veteran strongman Mahinda Rajapakse, was trying to form a “national unity” cabinet that would include members from a cross section of political parties in parliament, an aide said.

“The main task is to choose a cabinet and the work is already underway,” Nishantha Warnasinghe told AFP.

Sirisena had offered a 100-day programme to carry out urgent political and economic reforms, including moves to cut back on the powers of the president which Rajapakse had handed to himself during a decade in office.

Shortly after being sworn in, Sirisena appointed as new prime minister the parliamentary opposition leader Ranil Wickremesinghe, who is expected to wield considerable power.

Wickremesinghe is also seen as having significantly better relations with the West and regional powerhouse India.

Sri Lanka’s newly-elected president Maithripala Sirisena, pictured after being sworn in at the I …

In a previous stint as prime minister between 2002 and 2004, he managed to secure international support for a peace process designed to end the island’s Tamil separatist conflict.

The efforts ultimately failed as Norwegian-brokered negotiations fell apart when Tamil Tiger rebels broke off talks and returned to fighting in 2006, soon after the hardline nationalist Rajapakse came to power.

Rajapakse came to be shunned by many Western nations, who accused him of turning a blind eye to large-scale human rights abuses.

Several leaders, including the Indian and Canadian prime ministers, boycotted a Commonwealth summit hosted by Rajapakse in November 2013 over his refusal to allow an international investigation into claims of large-scale killings at the end of the war in May 2009.

In an address to the nation soon after being sworn in, Sirisena promised to mend Sri Lanka’s ties with the international community.

“We will have a foreign policy that will mend our ties with the international community and all international organisations in order that we derive maximum benefit for our people,” he said.

“We will work with friendship and brotherhood and cooperation with all states.”

Rajapakse fell out with the West over allegations his troops killed 40,000 Tamil civilians at the end of the civil war. He refused to cooperate with a UN-mandated investigation. 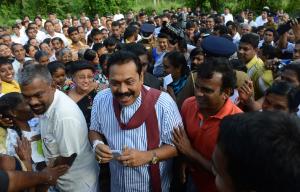 While in power he cultivated close links with China, which has invested heavily in Sri Lanka, seeking to counter rival India’s influence.

Beijing on Friday downplayed suggestions the new leadership could impact its projects in Sri Lanka.

Sirisena, a former health minister who united a fractured opposition to pull off an unlikely victory, also thanked his predecessor for a “fair election that allowed me to be the president”.

It was a remarkable setback for a leader who had appeared certain of victory when he called snap polls in November.

Sirisena has promised sweeping reforms of the presidency and said he will transfer many of its executive powers to parliament within 100 days.

He said he would serve only one term after being elected on a tide of resentment against Rajapakse.

The former leader rewrote the constitution after his re-election in 2010 to remove the two-term limit on the presidency and give himself more powers over public servants and judges.

“MS in stunning win over MR,” the Island newspaper said in a headline, noting that the transfer of power was smooth and the post-election period was unusually peaceful.

The state-run Daily News, which had led a vituperative campaign against Sirisena, made a volte face Saturday to praise the new president and relegated Rajapakse to a stamp-size photo at the bottom of the front page.

Just a day earlier, the Daily News had said that a victory of Sirisena “seems to be a figment of the imaginations of various interested parties”